When Falling Apart is Falling into Place.

It never ceases to amaze me that way that, in life, each little thing you encounter prepares you for the next. I supposed that’s relativity in action, huh? It also has become increasingly apparent to me that we really do get to decide how our stories are told and how we want to handle things. So what you’re about to read may sound like the ravings of a hypochondriac, but I can assure that, although coincidentally timed (and inopportunely timed, I might add), I am not, in fact, a hypochondriac. Which is unfortunate, because I hear sugar pills really work wonders.

So let’s take a step back. I started my triathlon training the last week in January. I’m noting this because I think it’s important to show that I wasn’t all that far along into it (a mere two weeks), but still it was impactful. So the week of my 25th birthday, I met with two different doctors, both of whom told me I was fascinating (Happy birthday!). Now, anyone who knows me knows how much I appreciate being special, so that was pretty top-notch news to me. For those of you who know I like to be special, you probably also know how much I value a good nap. On Monday, the first doctor, a sleep therapist, actually clued me into the fact that I am likely suffering (I say suffering because I’m dramatic) from something that is (no lie) called “Excessive Daytime Sleepiness,” or EDS. Turns out, my sleep paralysis and hypnagogic/hypnopompic hallucinations aren’t just pure lunacy or the result of childhood torture exposure to scary at the hands of my horror-movie loving grandmother, but actually symptoms of an overarching sleep disorder, which, when paired with EDS constitutes 3 out of the 4 major signs of Narcolepsy (of which you really only need three to qualify!).  Unfortunately, my insurance wouldn’t pay for an in-lab sleep study, so this one will remain technically undiagnosed for the time being. Naturally, the very first thing I did was  blame my mother call my parents and explain how growing up in our crazy family means that we have a warped sense of what’s normal, and that just because my grandmother sleep walks and talks and my dad sleep walks and talks doesn’t mean that I’m not weird but rather that we all are.  So this was Monday.

On my birthday, or Friday as the rest of you may have known it, I went to the eye doctor to evaluate what appeared to me as a sudden decrease in my ability to see at a distance. I had noticed it sometime after signing up for my benefits in November (and naturally selecting the lowest eye insurance program since Daniel and I both have perfect vision, obviously), and it had grown increasingly worse over the course of a few months. I described to my second doctor of the week the double vision I was experiencing when trying to read and the inability to focus at a fixed point. She ran a bunch of tests and discovered that I had “poofy optic nerves,” for which there are really only two causes: 1) drusen, or calcium deposits inside the optic nerve or 2) swollen optic nerves resulting from intracranial pressure in my brain. I received a “let me check with your last eye doctor and come back to see me in two weeks” diagnosis, got a pair of temporary contacts (to compensate for my decreased vision), and went on my merry way!

The next morning (Saturday), I received a text message from the eye doctor’s office to confirm my appointment for Monday afternoon. I called the office and the doctor confirmed that she wanted me to come in as soon as possible for what is known as a “Visual Evoked Potential” test. I will save you the time of googling it and let you know that the first 3-5 results will tell you that this test is used to diagnose one of the earliest symptoms of Multiple Sclerosis. I spent the rest of the weekend trying to keep from getting worked up over possibly having MS, convince myself that I didn’t have it, and simultaneously come to terms with what it would mean if I did. Daniel and I split our conversations between denial, seriousness, and mocking (“Is it too late to get a warranty on a wife?”). Over our Monday bike ride, I explained to my triathlon training partner, David, that I might have it and what that might look like for me. We talked about the increased importance of continuing our training and how, unless I was dying, he expected me to be in the pool or out on the road, because tough events happen sometimes not for your benefit, but just so you can be the inspiration someone else needs, and that I had a responsibility to myself and everyone else to stick with it.

That afternoon’s tests were “inconclusive” and a new set scheduled for Wednesday over lunch. Over the course of Tuesday, I came on the conclusion that, in the wise words of Pitbull, “Every day above ground is a great day.” My father provided some excellent advice by means of, “At this point, there is nothing you can do either way, so try not to worry about it” and I took the time to familiarize myself with what the quality of life for someone with MS looks like. Every time I felt like I might cry, I reminded myself that this just further reiterated the need to take care of myself and my body, no matter what. I think that it’s easy to become disassociated with the self–separating our minds from our bodies–but they are ultimately one and the same. I came to realize that caring for myself is also caring for my soul, and, ultimately, a very real investment in my long-term health. I have a picture on my inspiration board at home that just shows a road and says, “Run while you can.” The weight of this statement became so much heavier and much more inspiring as I began to consider the potential for eventual paralysis.

After several tests and a phone call to the place where I had Lasik (Yes, I had my vision perfectly corrected 3 years ago), it was confirmed that I did not have MS, but rather Optic Disk Drusen present in both of my eyes. A follow-up with an Ophthalmologist confirmed the suspicion, informing me that drusen are calcium deposits that develop inside the optic nerve and that the prognosis is progressive and insidious (meaning it sneaks up on you), and that while I may (70% chance) eventually go blind in one or both eyes, I won’t go blind anytime soon. At this time there is nothing that can be done.

For your entertainment, here is a photo of my drusen. They are the little white balls inside the black circle (my optic nerve). The whiter they are, the bigger/more prominent they are, meaning that at least I will probably go blind in my left eye (right side of the screen) first and not both at the same time! 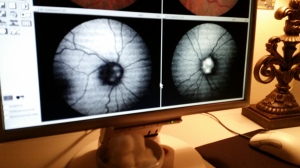 This has absolutely been a lesson in pending doom optimism for me. It’s amazing how just spending a few days thinking I had a disease like MS forced me to put a whole lot of things into perspective. Is the idea of going blind unsettling? Sure, a little, but it could be so much worse. Now I’m forced to look around me, trying to take it all in because there’s no guarantee when or if it will happen. In the wise words of my husband, Daniel:

“My thought is: You have all of these things [hypothyriodism, narcolepsy, drusen], and there is nothing you can do about any of them. So every morning when you get up you can either choose to say that you have these things and will be low functioning because of them, or choose to say I am going to do my best to be as good as I can even though I have these things. Now, I am not saying you don’t already do that, I’m just saying that it doesn’t matter what you have; putting a label on it won’t make any difference. All you can do is get up every morning and decide what you want to do with the cards you have. Some days you might have a good hand and others you might have a sh*tty hand, but you still have to do something with them.”

So that’s where we are. After our hiking adventure last weekend, the discovery that we would have to hike uphill in the rain in order to leave just meant we had to stay positive. Sometimes you find yourself in situations where there is no way out but forward, and you have the choice to dwell and be negative, or to excel and be positive. Either way, the distance, the conditions, and the outcome are the same, but the experience is vastly different. Life is kind of like switchbacks, and making it to the top of one sometimes means you’re at the bottom of another, but you’re still slowly moving toward the top. 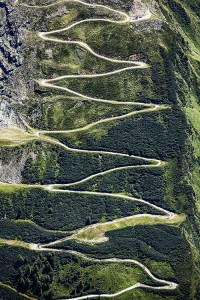 At this point, I’m just trying to give it my all. I’m in a really, really great place and feeling very lucky to have ended up in the best case scenario. So what if I’m tired? So what if it’s hard to focus? The day may come when something else keeps me from being able to perform at the ability I can now, and it would be a selfish waste to not do everything I can while I can. I am now acutely aware how quickly and easily the things we rely on can disappear, and these changes can be met with sadness or depression just as easily as they can be met with patience, gentleness, and embrace. Either way, the outcome is the same, but the experience is vastly different.  For me, falling apart has actually lead to me falling into place and I’ve never been more inspired.

So run while you can. 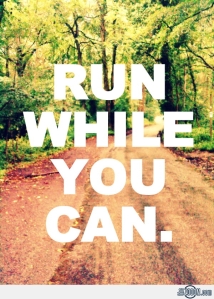 3 responses to “When Falling Apart is Falling into Place.”